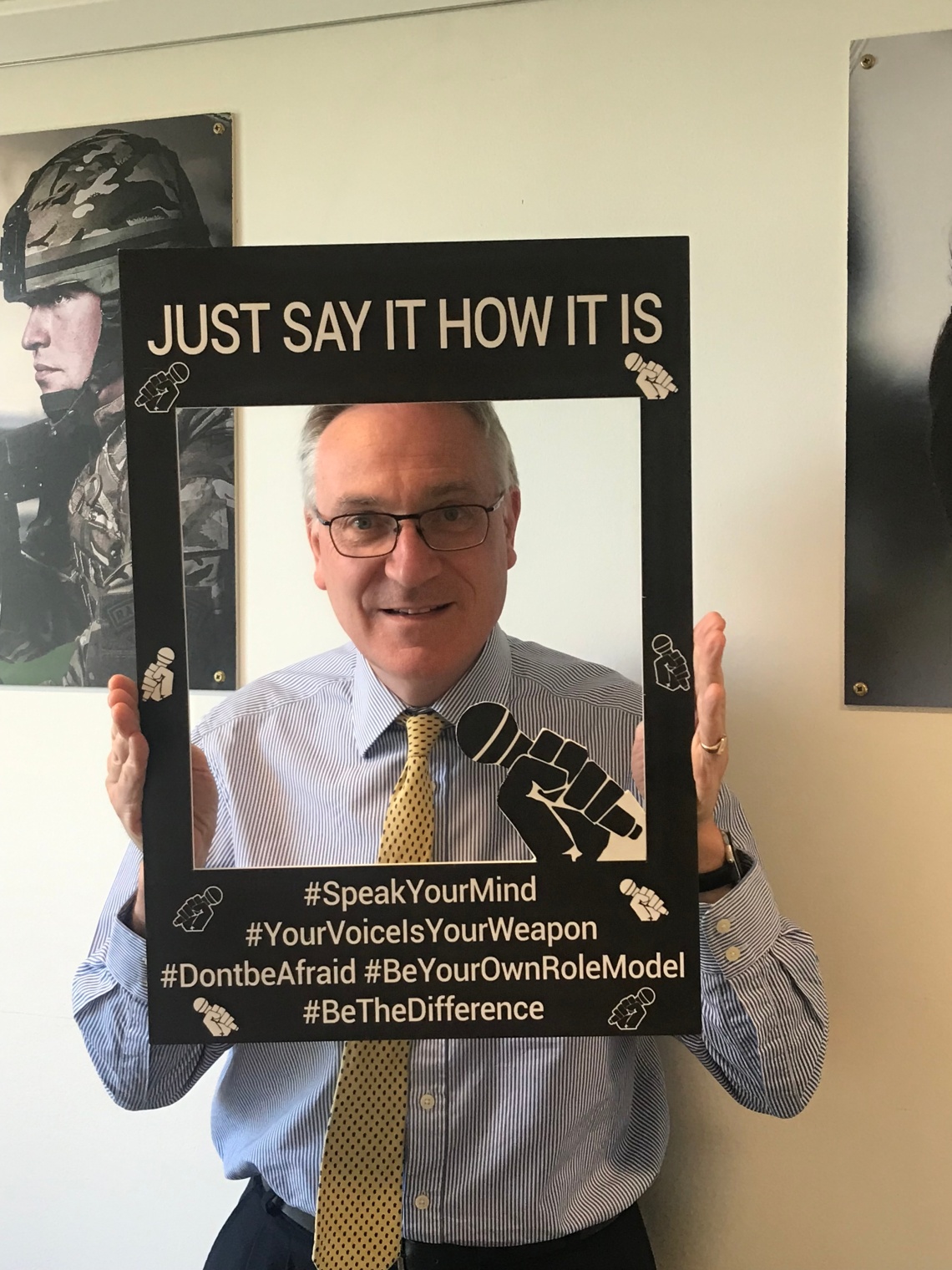 Who Is Lt General Richard Nugee?

A father, a husband and a soldier.  The youngest of 4 brothers. Someone who doesn’t come from a military family.  Both my parents’ family are immigrants from Europe, coming to England in the last 200 years.

You studied at Durham University what did you study and why?

I studied Anthropology and Psychology.  I started studying English but I was bored with it quickly and a friend of mine suggested Anthropology, which I found fascinating.  There can be no more interesting question than what makes you human, and where did humans come from.  It leads you to where are humans going and why do humans act as they do – what makes them what they are.

Who are or were your role models?

I have 4 role models.  The first is my mother, the most brilliant woman I have met, who worked at Bletchley Park in WW2, who was World President of the Mothers Union and in her spare time a JP and witness support at the Old Bailey.  At the age of 70, she started a Law degree at London University but didn’t take it too seriously.  She taught me caring, looking beyond the appearance to the person beneath. One was a Commanding Officer, who ended up a General, who taught me how to be an officer.  The other two were Late Entry Officers, who had gone from Private soldier to Lt Col, excellent examples of starting with nothing and finishing most highly respected, and who have promoted more times than I have.  They taught me how to lead, how to really understand people who come from a different background.

What is your current job role and what does this entail?

Chief of Defence People, responsible to Ministers and Chiefs for all central policy for serving personnel (regular and reserve), Civil Servants, families and veterans.  Around 3 million people I have a care for and influence through the CDP policies.  I have a very strong team to support me.

Why did you decide to join the British Army, was this your chosen career path?

My grandfather was the only soldier I had known as a child and he fought through the whole of WW1 and WW2, commissioning the year before WW1 (1913) and retiring 2 years after WW2 (1947).  He was a difficult man as he undoubtedly was suffering from his experiences in WW1, but just before he died he talked to me and my brother about how much he had loved being in the Army.  He was utterly inspiring and that week I inquired about joining the Army.  I was 15.  I chose to follow him, although he died before I joined.  I have followed his career totally by chance more closely than would be imagined.

You are a family man, being in the Army, did your family life suffer being away a lot or was there a balance?

My family would say I always put the Army first.  When I asked my sons if they would like to join the Army, my younger son said ‘why would I do that to my family?’.  But do we have a happy family with successful children?  Yes.  It has come at a price, with my wife finding it difficult to work, and so she has devoted her time to the boys.  There is probably less balance in my life now than when I was more junior.

You joined the Royal Artillery in 1985 what was that like?

It was the Cold War, so in Germany we were always at 4 hours notice to move out of the camp, always expecting to be deployed against the Warsaw Pact.  I patrolled the Inner German Border, shadowed by the Russians and East German Guards.  We went on long (6 weeks) exercises in new areas all the time and had to know our war positions.  I didn’t get out of Germany on leave for a couple of years as a high proportion of us had to be within 4 hours at all times; there was no channel tunnel and ferries took too long.  And if we were not exercising, we were on tour in Northern Ireland – I did 2 tours in my first 3 years from my first regiment.

It was different but seemed no less tough.  I was certainly fit as were most of my troop, as we deployed to NI so had to be fit.

In 2003 you were a commanding officer in the 40th Regiment Royal Artillery and were deployed to Iraq, what was that like for you and going back to your own experiences, how did you cope there?

I took over the Regiment just before deploying on Telic 2, and had to train the Regiment -there was very little formal training unlike for future tours and Telics.  The tour was one of increasing danger.  We started in a benign environment and would do lots of rehearsals for just a single search operation – we were learning on the job.   By the end of the tour, we were doing 16 searches at the same time, at half an hour’s notice, as we were much more professional and much more aware of the surroundings.  The fundamental difference with NI was that we didn’t know whether to trust the intelligence we were getting from the Iraqis – we were burnt once when we trusted one set of Iraqis only to find later that they were using us to settle old scores.  And none of us spoke the language.  I was given a great deal of autonomy with my Battle Group of over 1000 as a Ground Holding Battle Group Commander.  I coped by having an excellent team, and an extraordinarily supportive wife.

Then in 2006 you promoted to Brigadier in the Allied Rapid Reaction Corps and went to Afghanistan what was the experience like there for you and what was entailed whilst being deployed there?

This was odd.  I was brought in halfway through the Corps tour as a Brigadier only 16 months after finishing as a Commanding Officer as a Lt Col.  So I was absolutely not used to the rank and was the most junior of the ‘seniors’ by a long way.  But in the end, I was responsible for all targeting, liaising with the CAOC and also all the information operations.  And then also I was the press spokesman and responsible for all narcotics policy.  So I was busy.  Despite being only 5 months long, it was one of the hardest tours I have done.

It is a great honour and very nice to be recognised for what you have done.  But perhaps the one I am most proud of is my MBE, which was for my work as a very junior Major when I was genuinely amazed that anyone would have thought what I was doing was worthy of an award.

What has been your biggest achievement so far, career or personal life?

Have I had any?  Perhaps on my early operations not having any of my soldiers killed – one of my soldiers proudly introduced me to his parents as ‘the man who brought us all back from Iraq’.  And yet I have put too many flag-draped coffins on aircraft not to feel that responsibility keenly.  Away from operations, I would hope that my biggest achievement is showing that rank should not be a barrier to listening – to keeping an open door to ideas from others.  At home, I am incredibly proud of my boys, but that’s probably more to do with my wife than me!

Have you ever faced any negativity in the Army, if you how did you tackle this?

Little.  I face far more now, in my current role, from angry veterans who think we are not doing enough for them.  I try and link with them, understand their concerns and help where I can.  But Defence is a supertanker that sometimes takes too long to change.

Would you say more ethnic minorities are now joining the Army?

I’m not sure.  The Army has always attracted large numbers of ethnic minorities from the Commonwealth.  One of the most influential people in my earliest career was my first Quartermaster – a huge, bluff and yet generous Jamaican.  If you ask are there enough from the UK as opposed to the Commonwealth, the answer is no, we need more.  We need to be attractive to all the communities of this country; currently, we are very under-represented in various communities which we seem to find hard to get our message across to.

Also, what do you think of the newly formed BAME Network, in my opinion, I think it is a great idea and a great way to bring ethnic minorities together. What do you feel?

I agree!  Networks have the potential to be genuinely game-changing if approached in the right way.  We must do everything we can to make sure that those who consider themselves (and are) minorities are given every opportunity to be welcomed, supported, welcoming and supportive.

What positive changes have you seen since you joined in 1985?

Too many to mention!  From decent kit for the soldier (I bought most of my own when I first joined) to, more importantly, a genuine intent to recognise that there is no barrier to doing well in the Army or the RN or RAF except your own quality.  We are much more open to encouraging women and those from whatever background or faith/belief.  We have not got it all right yet, but we are definitely moving in the right direction, even if too slowly.  When I joined there was still a Women’s Royal Army Corps and the senior woman could only be a Brigadier, as the head.  Now we have 2 female Major Generals and a 3* in the RAF.

What do you enjoy about being part of the British Army?

Being with fantastic people.  My grandfather said there was no one better than a soldier and their humour.  I agree, although I would now say people in Defence – they are all motivated by a sense of service, whether Armed Forces or Civil Servant. 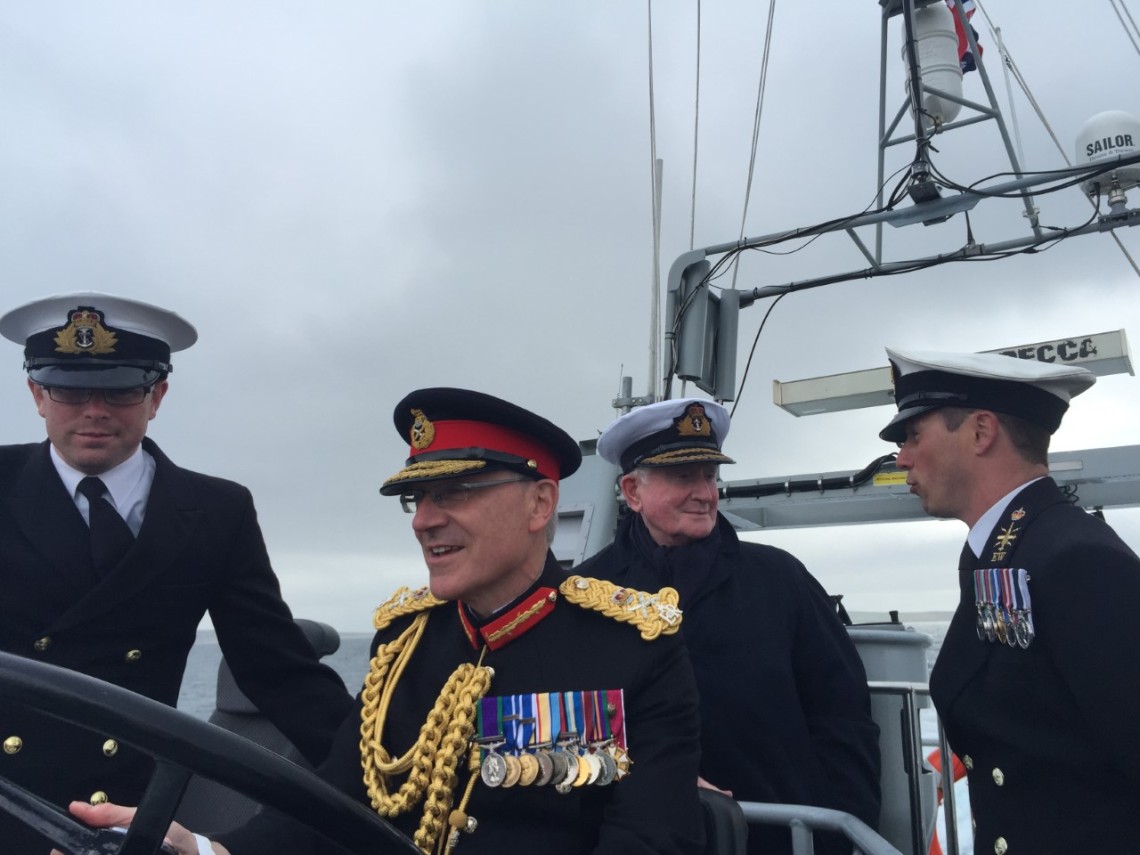 What advice would give to anyone joining the Army?

Enjoy it, look for opportunity, and accept that the less good bits only go to highlight the good bits.  And, most importantly, look to the people around you – they will support you as a team if you support them.

What is next for Lt Gen Nugee?

A year to go, then who knows?  I am absolutely determined not to become a ghastly arm-chair general sniping from the sides. So I’ll probably do something completely different.  What are you offering?

This site uses Akismet to reduce spam. Learn how your comment data is processed.